Five things I learned from ‘The Philosophy of Coffee’ 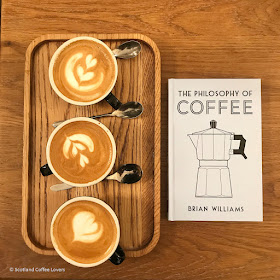 Like many coffee lovers, I follow Brian's Coffee Spot, staying up to date with the bloggings, travels and photos of Brian Williams.

I was happy to see that Brian had published an actual real book - both because I’ve been reading paper books out of preference lately - and because I feel like I’ve gotten to know Brian through his blogging, and wanted to see what he had to say about coffee, that was book-worthy rather than blog-worthy.

I whipped through Brian’s book in a few hours and thoroughly enjoyed his light-hearted and informative tale - one of the history, economics, politics and social change.

Here are five things (and there were many more) about The Philosophy of Coffee that I was struck by or had never paused to think about until Brian pointed them out:
There are plenty of other gems in Brian’s book which I highly recommend. You can buy it from Brian's publisher the British Library - as well as bookstores.
Share