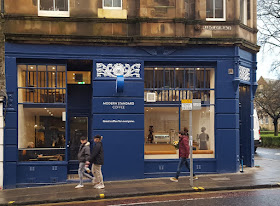 Review and photo by Charlie Ellis & Eva Vaporidi
Boasting a superb corner site in Bruntsfield, Modern Standard Coffee is a fantastic addition to the Edinburgh coffee scene.
Long renowned as a coffee roaster, this is Modern Standard’s first cafe. The brainchild of one of the pioneers of speciality coffee in the UK, Lynsey Harley, Modern Standard Coffee’s cafe at 49 Barclay Place began trading in early December 2020. We visited on its fourth day and were immediately impressed by the classy and airy interior, the warmth of the welcome from baristas Joanne (the manager) and George, and by the superb coffee.
We had piccolos which were flavoursome with lingering butterscotch notes. The beans used were a blend of 70 % Brazil Santa Lucia and 30% Colombia Aromas Del Sur. As Lynsey outlines the Brazilian is a great basis for an espresso but you need something such as the Colombian to add a layer of complexity and interest to the blend. For their batch brew they are using a Guatemala Finca La Providencia.
The shop was, for several decades, William Watt the electrician (a classic case of nominative determinism) and when Lynsey saw that was available to let in February 2020, she jumped at the chance; ‘I used to joke to my flatmate that this would make a great cafe...11 years later she called and said that - you'll never believe it but there's a to let sign outside...I said - that's fate’. After a pause in the spring and summer, she finally began work on the place in September. Its taken a fair bit of work to get the place ready (including lots of work on the flooring) but its been worth the effort.
The cafe has wisely retained the original wooden wall panelling which gives the interior real character. There is seating space for roughly 30 customers. Seating is available on the ground floor with a further attractive section on the first floor with views on to Bruntsfield Links. These seats will undoubtedly be in particular demand.
Native of Glenrothes, Lynsey studied, worked and lived in Edinburgh before moving down south and getting involved in the cutting edge coffee scene in London. This included a spell with highly regarded Fernandez & Wells. She's also spent time in Denmark – there is definitely a Scandinavian element to the look of the interior. She relates that ‘when I left Edinburgh there was virtually no coffee scene and even in London it was only about 50 people involved who all knew each other’. She now has 17 years experience in speciality coffee and is delighted to see how things have developed in Edinburgh in the last decade.
Since returning to Scotland she's been been looking to set up a cafe to act as a showcase for Modern Standard Coffee's excellent beans, which are now roasted in Glenrothes. Modern Standard import their own beans and supply a number of hotels and cafes across the UK. Though steeped in the speciality coffee scene she is keen to see Modern Standard Coffee attract a wide variety of customers, from coffee geeks discussing the minutiae of roasts and brewing methods to those who simply want a cracking cup of coffee in a welcoming and attractive environment.
Lynsey hopes that their coffee will be ‘tasty and approachable’ as ‘there's nothing worse than being overly pretentious and overcomplicate things and alienating people’. She feels that too many in the speciality coffee scene have a slightly snobbish attitude and can therefore be off-putting to many. 'Great coffee for everyone' is the slogan emblazoned on the side of the cafe (and on its mugs) and the philosophy she wants the cafe to embody. She was therefore delighted to have managed to recruit baristas who combine coffee making skills with great customer service.
For Lynsey, the feel and atmosphere of the place is just as important as the quality of the coffee which oozes out from the sleek Dalla Corte machine. In addition to espresso, Modern Standard Coffee also serve some batch brews, leaf teas and Colombian hot chocolate - with a high cocoa content (52 %). T
They also be serving baking, including scones baked in-house (a new oven ideal for scones had just arrived when we visited). But coffee is very much the focus and Modern Standard Coffee won't be entering the brunch market as Lynsey wants customers served quickly, not waiting around for their orders to arrive. Lynsey also hints that she is on the lookout for other venues.
With Castello a few doors along and Artisan Roast and Machina Espresso also very close, the area near Bruntsfield Links is becoming a leading destination for coffee lovers. Charlie Ellis & Eva Vaporidi. Date of visit: 8.12.20 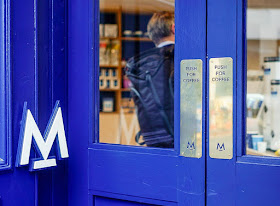